I finally left Seville, from where I sent my last postcard, as Spain entered what the government are calling the new normal. However, passing through Ronda I saw that the people do not necessarily agree. The term ghost town has, by necessity, been vastly overused in these pages, but what else can one say? The lovely old historic restaurants like Hermanos Macías, opposite Spain’s most historic bullring, and the classic Almocabar, named for the gate in the Moorish battlements it sits beyond, are both closed. END_OF_DOCUMENT_TOKEN_TO_BE_REPLACED

Europe’s most sensuous city in a time of social distancing

Six weeks ago I wrote about a dream of wandering the streets of Seville, far away from my prison quarantine in Jimena de la Frontera in the forested wilds of central Andalusia.

But no imagining could have been quite as dreamlike as finally stepping off the bus at the Prado de San Sebastián, where they once burned heretics, but now welcome tourists.

The Sevillian sunlight in late June has that perfect golden slant, between the chilling white of winter and the lazy burnt yellow of true summer which comes at the end of July. The temperature here is already mid-30s in the shade and a coronavirus-cleansing 40 degrees in the sun.

I am met by my old friend, Nicolás Haro, a native of the city, who I have not seen since the pandemic began.

“It has been strange, mi amigo, to be locked away because the government lacked the hospitals and personal protective equipment to allow us to be together. After all, we will all catch this virus.”

I agree with his fatalism, but, for the moment at least, Seville is one of the clearest places on Earth, with a mere seven Covid-19 hospital patients in a city of over a million, and just two in intensive care.

Despite this, we drive down almost deserted streets and those people we do see are masked and separated. The bars and restaurants for which the city is famed are shuttered. END_OF_DOCUMENT_TOKEN_TO_BE_REPLACED

After two months of draconian Spanish lockdown, with fines for ‘bad attitudes’, I’m dreaming of the feria

After six weeks of house arrest without even the opportunity to go to the village shop like their parents, or to go to the park like their pets, Spain has finally released its children – those aged 14 and under, with supervision, within a kilometre of home, and for no more than one hour a day.

Given that the average size of an apartment in Seville, our regional capital, is less than 600 square feet, one can only marvel that domestic violence has not been a bigger problem.

Of course, with three quarters of a million fines being issued by police and the Guardia Civil during that period, perhaps people did what they naturally do and simply found a way around an impossible set of laws. One could hardly blame them. The social contract is wearing thin.

One of the categories of fine listed in a recent document from the national government includes €2,000 for “inappropriate attitude”. What exactly would be appropriate right now? Perhaps one should not be surprised that a revenue stream is being taken advantage of as the Spanish economy goes into the steepest decline since the Thirty Years War. END_OF_DOCUMENT_TOKEN_TO_BE_REPLACED

We wake today in our village of Jimena de la Frontera – a full month into lockdown – to the news that the social democrat Prime Minister is planning to extend confinement by another month, while his hard socialist deputy has called for nationalisation of everything up to the coronavirus itself. We live, as the Chinese like to curse, in interesting times.

That same deputy’s criticisms of the Spanish Head of State, King Philip VI, for wearing military uniform in his rather dignified public appearances as Commander-In-Chief of the Armed Forces were ill-advised, though, with even left-wing allies pointing out that their own communist heroes – Che Guavara, Castro, Chavez and Maduro – were wont to adopt the same fashion, although normally to a far darker purpose than Spain’s constitutional monarch.

Along with the announcement of prolongation, they spoke of a loosening of the lock-down. For example, one can now exit one’s habitation to purchase a “necessary” pizza from the takeaway, rather than just its equally “necessary” frozen cousin from the supermarket. Personally, this writer finds this hardly a loosening of the manacles. And if anyone doubts the reality of those restraints, the view from the balcony of the Spanish Marines questioning anyone leaving buildings on my street is quite clear.  END_OF_DOCUMENT_TOKEN_TO_BE_REPLACED 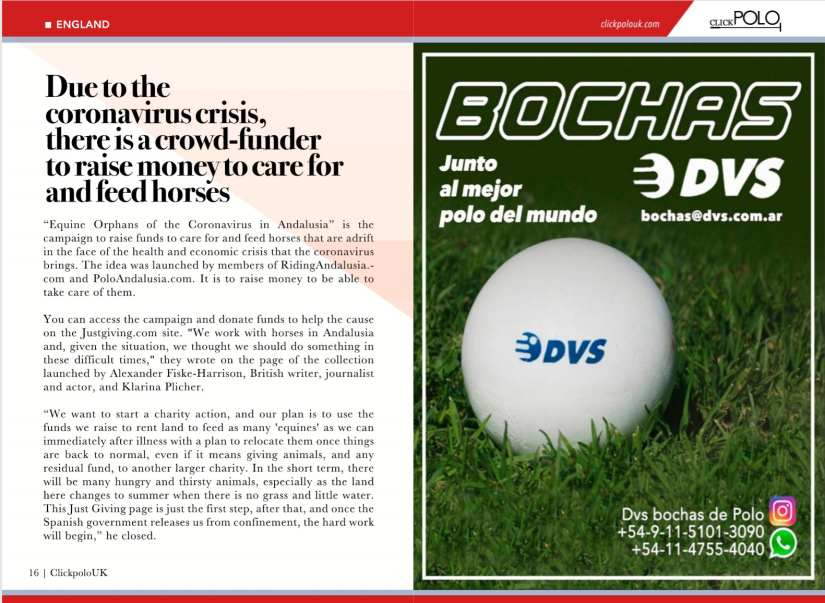 Will the Spanish summer be too hot for coronavirus?

Predictably, the left-wing coalition that governs Spain has extended our confinement to quarters. This is done in a singularly Spanish manner: no outdoor exercise, with police or armed forces personnel checking your grocery receipt to ensure you did not dawdle on your way home. With 50,000 fines for breaching the rules in Madrid alone, the government seems to have found a way to raise some of the money they lost putting our economy into what they call “hibernation.”
This is, of course, the same government that defied all medical advice and allowed a third of a million people to march arm-in-arm through the streets of Madrid on International Women’s Day last month. Inevitably, hospitalisations in the capital quadrupled within five days, and the course was set for the present contagion.

However, after 24 days of climbing the walls and running around the apartment – some 40 miles covered in 1,600 laps of a small two-bedroom flat – the data finally seems to show the curve is not only flattening, but beginning to descend. Here in our little town of Jimena de la Frontera, the voice of hope can be heard, in part because of what many regard as the bane of the town: its summer. END_OF_DOCUMENT_TOKEN_TO_BE_REPLACED

A postcard from Spain, where the Marines have arrived to enforce our draconian lockdown

The Marines rolled into town on Friday to ‘support’ the police and the Guardia Civil. Admittedly they arrived in olive green pick-up trucks, not Humvees or 4-tonners, and were only kitted out with 9mm pistols strapped to their thighs, not full assault rifles, but those who questioned my last postcard from Andalusia, where I spoke of “martial law in all but name”, should be under no illusion about the Spanish style of lockdown.

As I predicted, last week the government extended our fortnight of house-arrest to a full month, and this week they instituted even harsher measures, putting the economy into “hibernation” in the government’s terrifying phrasing. END_OF_DOCUMENT_TOKEN_TO_BE_REPLACED

It was when they taped off the children’s playground on the Plaza de la Constitución, as though it were a crime scene, that we knew the rumours were true.

All that Saturday the streets had been empty of people save the town’s ex-pat population as the Spanish government debated at every level – local, provincial and national – about what would put on ‘lockdown’ and how. I came down from my balcony to investigate as the local police pinned a notice to the swings, reading “Proclamation: Preventative Measures for the Protection of Citizens against the Coronavirus”, written in the name of the Mayor, and followed by a list of closures ranging from the municipal library to the 12th-century Moorish castle which stands guard over our Andalusian hilltop town.

Knowing that more was sure to come we stayed at Bar Pastor until closing time. The next morning we woke up to find the police sealing that bar, and all the others. It had begun. END_OF_DOCUMENT_TOKEN_TO_BE_REPLACED

I recently did an interview with fellow author – a specialist on Spanish and Moorish History and Art – Jason Webster for the Idries Shah Foundation (online here) on my interest in Sufism and my history in el mundo de los toros, ‘the world of the bulls’ in Spain.

Sufism is perhaps best described as a mystical form of Islam more closely related in its theology and philosophy to Buddhism than the other interpretations of Mohammed’s teachings, and as a result is the most internally persecuted variant of that religion both historically and during its current civil war.

Idries Shah was a noted author for many reasons but most of all introducing the ideas of Sufism to the West, as he did to me via his book The Caravan of Dreams.

Sufism’s link to the corrida de toros, a dance with the evident threat of – and executing with a sword the magnificent reality of – a Spanish fighting bull may seem distant, but they are there.

One link is purely circumstantial: I first read his writings immediately before I discovered Spain because, as I say in the interview, his was one of the few books I took with me when I went to live in the Sahara desert. When I returned to Europe, it was by ferry from Tangiers, so I landed in – and fell in love with – Spain. (Almost exactly twenty years ago to the day.)

I hope I brought out more than such minor personal and geographical links, though, in my rather digressive responses to Jason’s questions, ranging as they do from German philosophy to the Qur’an, Oscar Wilde to William Shakespeare.

Now I must return to work on the second edition of Into The Arena: The World Of The Spanish Bullfight, to take advantage of a resurgent publicity in its favour, such as in the most popular magazine in bullfighting, 6Toros6 (right), or in my long feature in the most recent issue of the Boisdale Life (see post above.)

Anyway, once again, the interview is here.