After two months of draconian Spanish lockdown, with fines for ‘bad attitudes’, I’m dreaming of the feria

After six weeks of house arrest without even the opportunity to go to the village shop like their parents, or to go to the park like their pets, Spain has finally released its children – those aged 14 and under, with supervision, within a kilometre of home, and for no more than one hour a day.

Given that the average size of an apartment in Seville, our regional capital, is less than 600 square feet, one can only marvel that domestic violence has not been a bigger problem.

Of course, with three quarters of a million fines being issued by police and the Guardia Civil during that period, perhaps people did what they naturally do and simply found a way around an impossible set of laws. One could hardly blame them. The social contract is wearing thin.

One of the categories of fine listed in a recent document from the national government includes €2,000 for “inappropriate attitude”. What exactly would be appropriate right now? Perhaps one should not be surprised that a revenue stream is being taken advantage of as the Spanish economy goes into the steepest decline since the Thirty Years War.

Notably, in the same week as that document surfaced the Chief of the General Staff of the Guardia Civil seemed to suggest, in a press conference, that his job included suppressing dissenting opinions in the media and social media to the government’s management of the crisis. Of course, it transpired that these were no more the orders he was given: it is not the warriors but the politicians who are to blame.

However, I vowed not to devote this postcard from Andalusia, unlike my previous ones, to an attack on the frankly heroic foot-soldiers of Spain’s security apparatus. These are not men and women just following orders, but doing so with the intent of saving lives. It is not for them to wonder if their paymasters are wasting money by asking them to spray the streets with bleach – a measure which led one American environmental health scientist to counter “nobody goes around licking sidewalks or trees.

This would usually be a time of celebration in Andalusia Credit: getty

It was actually heartening to see the townspeople of Jimena walking laps of the square with their young. Or, in the case of our neighbour, not so young. A word to the wise: putting your full-grown offspring on a hoverboard so when you promenade the plaza with them at your side they tower over you is not the best form of subterfuge.

Anyway, the chatter of voices in the formerly silent square made me think of where I would normally be at this time of year, the Feria of April in Seville, and the sort of travel article I would usually be writing. For this is the time when all hispanophile scribblers worth their salt are singing the praises of that most radiant jewel in Spain’s crown.

If this were any other spring, I would have been talking to ‘Gordo’ and the other waiters at the elegant Bodeguita Antonio Romero on Calle Antonio Diaz by the river Guadalquivir, where their elaborations on the bocadillo, especially their famed piripi, have taken the humble sandwich to the realm of art.

There you stand with a foot on the brass rail and order them one after the other as the people jostle around you and cry out for Cruzcampo beer with all the vivacity of southern Spain, while you admire the “beads of cool on the glass” (gracias Hemingway.)

From there you walk up the street, the Baroque grandeur of the Royal Maestranza bull-ring on your left, towards the far older Gothic madness of the Cathedral, stopping on the way to say hello to Emilio at Casa Matías on Calle Arfe and to share a glass of dry manzanilla sherry. Re-energised, you carry on your pilgrimage to sample a tapa of pork loin in oil from Jerez with a glass of ‘Piérola’ Rioja at Casa Morales with its giant wine amphorae stored in the chilled shadows, a bar which has remained in Morales family hands for 170 years (although must also be at risk right now, like the jobs of Diego and Joanna, who have tended me at that bar for two decades.).

If you still have the strength there is the similarly well-known and similarly antique ‘Las Teresas’ on the street of the same name in the old Jewish Quarter, where you used to find Kennedys rubbing shoulders with Spanish Marquesses all shouting for a plate of their jamón.

You can still find the latter there today, although they now jostle for space with only marginally less esteemed Americans like the great bull-runner from Brooklyn, Joe Distler, who, when not in Pamplona, holds court at the corner of the bar alongside former Texas rodeo-champion Larry Belcher, and that great veteran photojournalist of combat and culture, Jim Hollander, capturing the moment yet again for posterity. 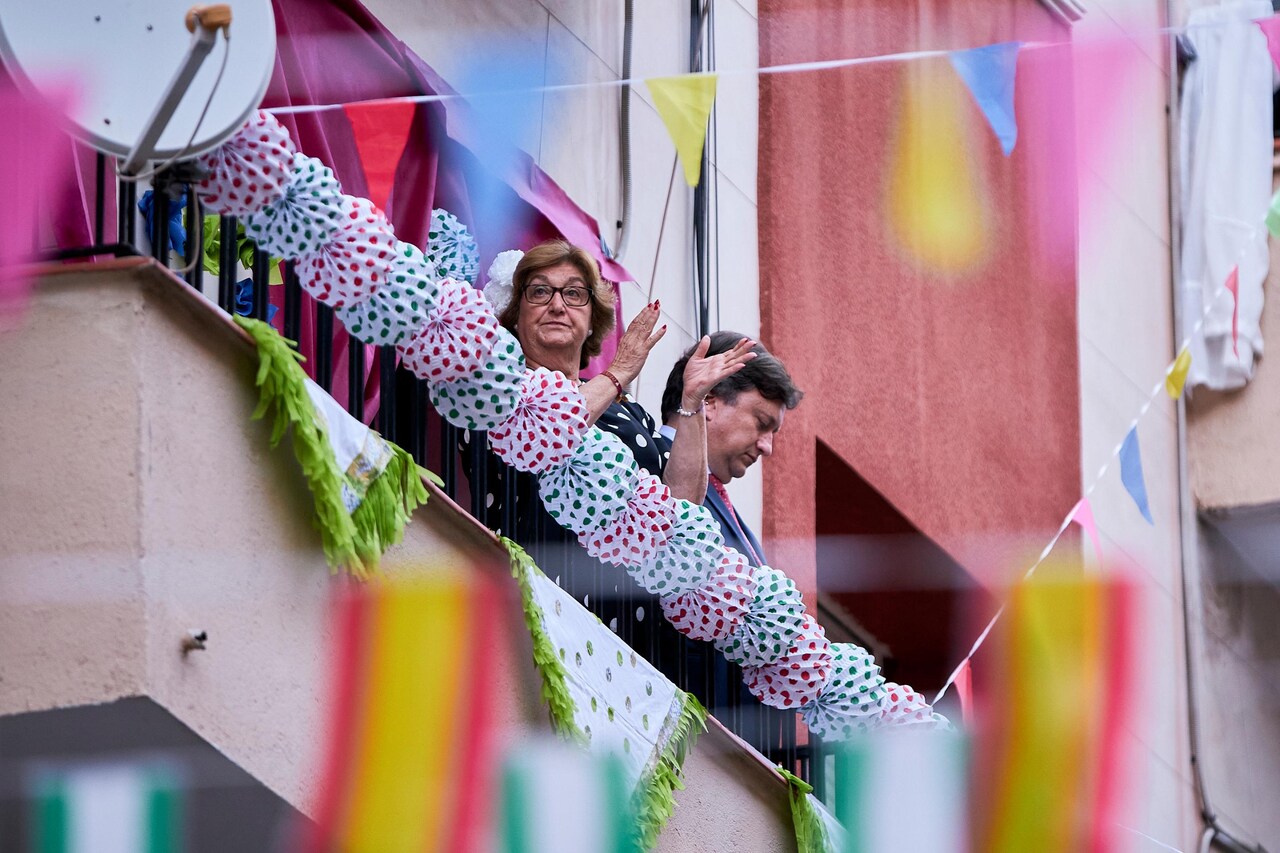 The Spanish have tried to adopt the feria spirit while still on lockdown Credit: getty

Then one rolls merrily back to one’s hotel, the grand old dam’ the Inglaterra, which used to house England’s own King Edward VIII before he abdicated, or the labyrinthine architectural histories that form the Hotel Las Casas de la Judería, where you’ll still find the Duke and Duchess of Segorbe taking a last glass in their own bar, suave and sardonic with grace and good-humour.

All this has been taken from us for now, and perhaps for longer: for it is easy to board up a bar, but it is a lot harder to take those barriers down, especially in a country so brutally mismanaged that borrowing on the global markets – as the government will surely have to do – will be met with a raised eyebrow and an interest rate raised far higher.

However, it will be back. One has to believe that. Or what else are we fighting for?.