TPP Editor’s Note: As this blog falls in disuse, I leave you with the result of my twenty years research into the world of the bulls on my other site – AFH

TLA Editor’s Note: This 10,000 word essay has been updated for republication since its original appearance in 2016. I have, however, kept the original data from Spain’s Ministry of Culture etc., as relevant changes have not really occurred: there were 1,521 bullfights in 2018, and 17,698 bull ‘festivities’ as defined below. And, as reported on the site here, the great matador Iván Fandiño was killed by a bull in a ring in France – AFH

When I first went to my first bullfight 20 years ago, I was 23 and was sure I would hate it. I was a passionate animal lover and had been a keen amateur naturalist since childhood, WWF & Greenpeace member and zoology undergraduate. It is obvious that ot an auspicious CV for a future aficionado a los toros.

As expected, what I saw contained many moments of brutality and blood but I was surprised also to find I could see beyond them to feel moments of breathless thrill as well. What genuinely shocked me, though, was that I could also perceive intermittently, and only with one of the bullfighters present, a kind of beauty that was entirely new to me.

In my moral confusion, I decided to research this alien thing, reading what I could in English – mainly Ernest Hemingway and Barnaby Conrad – and going when possible to see a corrida, a ‘bullfight’, on my irregular visits to Spain. Each time I went with a little more understanding and a little less aversion. Some would argue I became more sensitive to the aesthetics, others that I had become more inured to the ethics (or lack thereof.) I wouldn’t like to say either way.

In 2008 I was commissioned to write a book on the subject and I moved to Seville for two years and among other researches I trained as a bullfighter to the level of matador de novillos-toros – a novice level matador de toros bravos – ending by killing a single animal in the ring, a novillo, a three-year-old bull weighing around a third of a ton. (Into The Arena: The World Of The Spanish Bullfight was published by Profile Books in 2011 and shortlisted for the William Hill Sports Book Of The Year Award the same year.)

As part of the research, I also attended the encierros, ‘bull-runs’, of Pamplona and ran with fear and ignorance among the masses of drunken foreigners and adrenaline seekers. Unlike those visitors, I returned, and ended up running in towns across Spain, away from the tourist trail and among those born to this bloodless and less ritualised, more pagan practice.

I ran with the bulls from San Sebastián de los Reyes in the suburbs of Madrid, to Falces, where you hurtle pell-mell down a goat-path, bordered by a sheer drop, in the foothills of Navarran Pyrenees. From Tafalla, also in Navarre, which resembles Pamplona in the 1920s to Cuéllar in Old Castille, which hosts the most ancient encierros in Spain.

(The book I edited and co-authored with the Mayor of Pamplona, Ernest Hemingway’s grandson, Orson Welles’s daughter and the finest bull-runners including the late Julen Madina, Jokin Zuasti, Joe Distler and Reuters & EPA photographer Jim Hollander, The Bulls Of Pamplona, was published by Mephisto Press in 2018, purchasing details are online here.)

I may be something of an oddity in my afición in English-speaking countries – although there is a Club Taurino of London as there is of New York – but in Spain (or Portugal, France, Mexico, Colombia, Peru, Ecuador, Venezuela) the picture is very different.

According to the annual figures on asuntos taurinos, ‘taurine matters’, published by Spain’s Ministry of Culture, the bulls are on the way back for the first time since the world economy collapsed in 2008.

There were even large increases in some regions – Andalusia, Aragon, Murcia, the two Castiles and the Basque Country – and it seems that Madrid was the real fall, perhaps a reflection of the strange political stirrings going on in the capital.

The number of bullfights in the broader sense of the word – including novilladas for novices and rejoneo for horseback toreros etc., – 80% of which occur in Andalusia, Madrid and the two Castiles, had fallen by 7% to 1,736, but this after a slight increase the year before.

Far more importantly in a country where subsidies distort the market, the number of people actually attending bullfights in 2015 was up to 3.7 million, an increase of more than a third of a million since 2011 when my book came out. Back, in fact, to pre-financial crisis levels.

This is alongside some 6.4 million having watched bullfighting on the television to which it had only returned in 2015 (and half a million more on the internet.)

‘The North Of Castile’

The Joy Of The Thrill

Lungs burning, vision fuzzing, heart thumping and hands shaking, I stood watching and chatting with my companions in the street, Josechu Lopez and David Garcia, as the last bull moved up the street last Tuesday, in the antepenultimate encierro of the oldest feria of bull-running in the world, and the last time I expect to find myself sharing the asphalt with my favourite animal ever again. 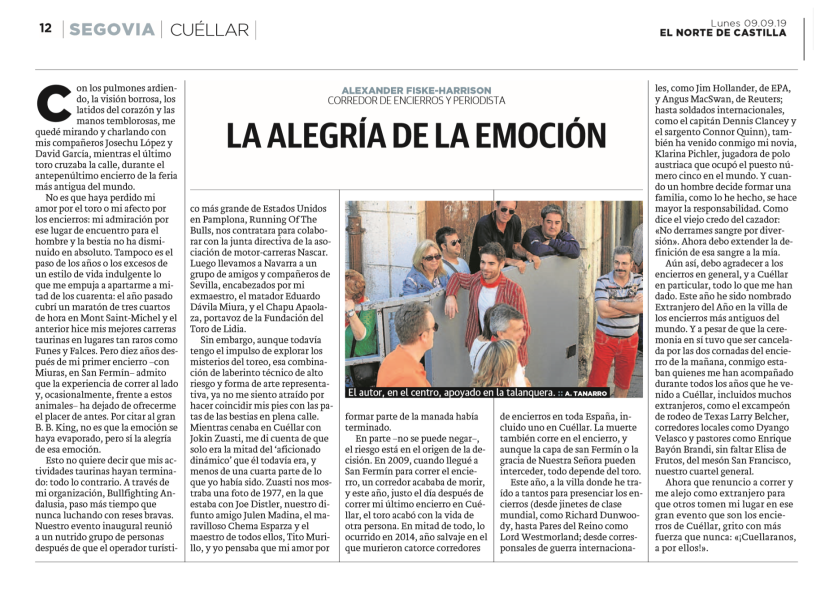 It is not that I have lost my love for the bull or my affection for encierros, ‘bull-runs’: my admiration for this meeting place for man and beast is entirely undiminished. Nor is it the decrepitude of old age or excesses of an indulgent lifestyle that are pulling me out as I enter my mid-40s: I could still clock a three-and-three-quarter hour marathon in Mont Saint-Michel in France last year, and did my finest taurine runs ever the year before that in such rarified places as Funes and Falces.

No, ten years after my first ever encierro – with Miuras, in San Fermin – I have had to admit that my personal experience of running alongside, and occasionally in front of, such animals has ceased to deliver a pleasure that outweighs the ultimate risk. It is not that, to quote the great B. B. King, “the thrill is gone”, but that the joy in that thrill has.