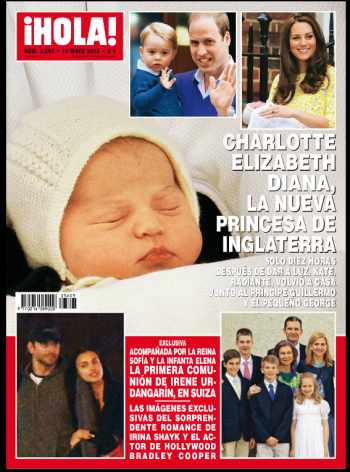 The May 13th (2015) edition of ¡Hola! magazine Spanish parent of Hello! magazine (which runs through Latin America as well), opens with a long feature with the headline “Alexander Fiske-Harrison, the English ‘gentleman’ who one day became an expert on bullfighting” (pp.4-12.)

I enclose the text of my interview in the original English below. Interview, introductory preamble and captions are by Mamen Sánchez, director of ¡Hola!

With thanks to the Hotel Alfonso XIII in Seville and my family tailors, Gieves & Hawkes, No.1 Savile Row, for my suit and Ralph Lauren for providing me with clothes in the Feria de Abril in Seville this year.

Descended from one of the most ancient and aristocratic families of the United Kingdom, ancestored by King Edward III

The English Gentleman who one day became an expert of bullfighting

We open the gates of his historic ancestral home Otley Hall, built in the 16th Century.

(Photo: Alexander Fiske-Harrison. We open the gates of the familial home, a historic building of the 16th Century, the manorial estate of Otley Hall, in the county of Suffolk. The Fiske-Harrisons are descended from Margaret Plantagenet, daughter of the Duke of Clarence.)

Alexander Fiske-Harrison comes from one of the oldest and most illustrious families in England. The Fiske-Harrisons are the descendants of Margaret Plantagenet, daughter of the Duke of Clarence, brother of Edward IV and Richard III, Kings of England.

Educated at Eton, he holds Masters in Arts and Sciences thanks to his studies in Philosophy and Biology at the Universities of Oxford and London. Son of a prosperous investment banker in ‘The City’, Alexander can presume to be the genuine “gentleman”. Elegant, humanist, lover of nature and man of letters, he is the author of numerous books and essays, a playwright and a regular contributor to newspapers and magazines including The Times, Financial Times and The Spectator.

Following in the footsteps of Ernest Hemingway, there awakened in him an interest in bullfighting which brought him to Spain, first as a researcher and later as an authentic lover of the ‘fiesta de los toros’. From the hand of great Maestros such as Juan José Padilla, Eduardo Dávila Miura and Cayetano Rivera Ordóñez and through his friendship with Adolfo Suárez Illana [son of Spain’s first democratic president, the Duke of Suárez], who first introduced him to the world of bullfighting, Alexander has become a valiant bullfighter. He killed a bull of Saltillo and participated in various festivals, he has run for six years in the bull-runs of Pamplona and has written one of the most referenced books on the world of bullfighting: Into The Arena.

A complete discovery, Alexander, greets us in Otley Hall, a historic Tudor Manor in the county of Suffolk. This building, dating from the 16th Century, connects the Fiske-Harrison family and the Kings of England, and a great-granddaughter of Margaret Plantagenet here contracted marriage with the then Lord of the Manor of Otley Hall, John Gosnold.

– What links you to Otley Hall?

The different parts of my family have owned many houses over the centuries, like Copford Hall which still belongs to cousins, but Otley was the site of probably the greatest union of the Fiske family. The Fiskes first arrived in that part of England as Vikings at the Battle of Maldon in 991A.D.

One of my ancestors, Reverend John Fiske married Elizabeth Gosnold, the daughter of the Master of Otley, in 1724. Through her we trace back our line back to King Edward III and the Plantagenets.

The Gosnolds were an impressive family. Bartholomew Gosnold founded Jamestown, the first permanent English colony in the Americas, and named Martha’s Vineyard, now home of the Kennedy family, after his daughter. The family lost their wealth by remaining loyal to the King in our Civil War.

– How was your passion for the bulls born and for all the taurine traditions of Spain and, what’s more, how did you learn to bullfight and to run the bulls of San Fermín in Pamplona all those years?

My brother Jules was a student of Spanish, lived in Córdoba when young, and so I grew up with the poster for a bullfight outside my bedroom door and the poetry of García Lorca in the air until his death in a skiing accident in 1988.

In 2000 I first visited Seville with my parents and they, who had seen El Cordobés and Antonio Ordóñez in their epoch, asked the concierge at our hotel, the Alfonso XIII, for tickets to a “bullfight.” It was the last novice bullfight of El Fandi, three days before he became a full matador, and he was amazing, a perfect introduction: fearless, athletic and impressive.

I went back to Seville every year and saw more bullfights and read what I could in English – Ernest Hemingway, Kenneth Tynan, Barnaby Conrad – and wrote an article defending the bullfight for the British political magazine Prospect. Then I was asked to write a book, and that is how Into The Arena was born. I first went to Pamplona as research for the book.

– How were you introduced into the world of the bulls: who are your friends, your Maestros, where did you learn to bullfight?

I had two contacts in the world of the bulls. One was Princess Gerarda de Orléans-Borbón, cousin of your King. The other was Don Adolfo Suárez Illana, son of your late President. They both opened the doors for me – through Geri I was introduced to the bull-breeding families of the south, and through Adolfo the matadors. I became friends with the Miuras, Domecqs, Núñez del Cuvillos and Moreno de la Covas, and was trained by Maestros like Adolfo’s brother-in-arms Juan José Padilla, Finito de Córdoba, Cayetano Rivera Ordóñez, but most important of all was the man who spans both of these worlds, Eduardo Dávila Miura, whom I saw recently reappear in his suit of lights in Seville with the famously dangerous bulls of his uncles from which he took an ear with the best sword of the Feria de Abril.

– How does it feel to be in front of a bull? Are you afraid?

The largest and most dangerous animal I have ever been in front of was a bull of the ‘brand’ of Saltillo from my friend Don Enrique Moreno de la Cova. From that bull back to the first calf I faced as an untrained amateur at Fuente Ymbro with Adolfo… yes, I have felt fear. The trick is to direct the adrenaline that produces the fear into focus – let it speed up your reflexes and sharpen senses, but not take away your control.

– How is the night before you fight?

That is worse, because the moments of truth are near, but you have nothing to focus on except your fear.

– Do you fear death? Do you enjoy danger?

Death is something I know intimately from my brother’s accident. That created me, and being near it continues to make my art: in toreo, in literature, in theatre. The motto of my family is a line from The Art Of Poetry of Horace: “Both ourselves and our works are a debt owed to Death.”

There are too many! At first thought: Shakespeare, Albert Camus, Dostoevsky, Jorge Luis Borges from Argentina and García Lorca. The Austrian philosopher Ludwig Wittgenstein I count as a guide. Hemingway was a huge influence, and I first met his grandson John in the bull-run in Pamplona. We have been close friends ever since. He wrote a great chapter for our book on bull-running Fiesta: How To Survive The Bulls Of Pamplona, which even had an introduction from the Mayor and advice from the great runners like Julen Madina and the American Joe Distler.

– What is your relation with the family of Orson Welles?

The two most famous Anglo-Saxons associated with the bulls have been Hemingway and Orson Welles and I admire both, so was particularly pleased when the daughter of Welles, Beatrice, wrote to thank me for writing about her father on my blog, ‘The Last Arena’. We became friends and she also contributed to Fiesta.

– How would you describe your books?

Besides my writing on the bulls, I write on many subjects. I wrote a play in the West End set in 1900 Vienna in which I acted – the chairman of my acting school when I studied in New York was Marlon Brando, another great influence.

My new novel, The Devil’s Voice, has been compared to the work of Patricia Highsmith, especially The Talented Mr Ripley of which they made a famous film. My next book will be non-fiction about wolves. I am going to go and live with them in America. I have a great love of wildlife.

– Your family are bankers, have you ever thought of joining them?

Fiske plc is the company of my family. I did work there when I was young, but that career was not for me. I remain on the board of directors. I work hard for them, but I work harder for Spain, with talks and guide books, travel articles and joint ventures. I am always looking for new work to help Spanish tourism…

– What is your philosophy of bullfighting?

I was invited to present a paper to the Foundation of Taurine Studies of Seville at the Maestranza which I titled “The Statue And The Storm.” It sums it up well: the art and technique which brings elegance and defiance in the face of wild nature and death.

– What are the qualities you value most in a bullfighter?

The technique which allows a matador to adapt to the bull and bring out its own best qualities, and to do so with the art which transmits emotion to the public. As Michelangelo said of himself as sculptor, “I saw the angel in the marble and carved until I set him free.”

– Who are your favourite toreros?

Putting my personal friends to one side – I have no objectivity about them – Morante de la Puebla for the beautiful depth of his capote, José Tomás for his implacable verticality, José Mari Manzanares jr. for his smoothness, and El Juli for having the knowledge of an encyclopaedia but applying it with art, always with art…

– Do you have a property in Spain? Would you like to own a fighting bull-breeding ranch?

To own a ranch is a dream, but an expensive one. I am currently planning to work on a tourism project involving a finca with my friend Francisco del Cuvillo, but it is not finalised yet.

P.S. I was delighted to see that my Maestro and friend, Eduardo Davila Miura, who features so much in the interview and photos above, was chosen by the new King of Spain, Felipe I, to be his taurine advisor at his first bullfight as monarch, at the Madrid bullring, Las Ventas, this week during the feria de San Isidro. AF-H

The formal portrait and landscape shots were taken at Otley Hall in Suffolk, which belonged to my ancestors, for which I would like thank Ian and Catherine Beaumont who own it today and the great fashion photographer Andrea Savini. The photos from my days in ‘the world of the bulls’ with the likes of matadors Cayetano Rivera Ordóñez, Juan José Padilla and Don Adolfo Suárez Illana are by the great art photographer Nicolás Haro.